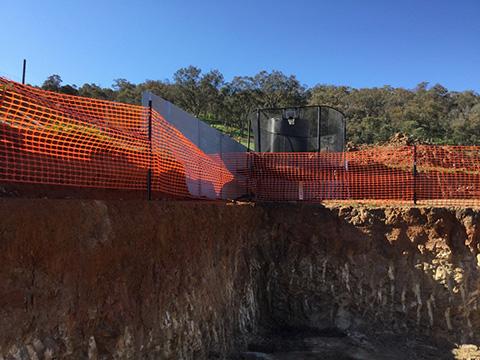 Our Proactive Inspections team targeted the Wodonga area in mid-September. Here’s what they found.

A proactive inspection by the Victorian Building Authority (VBA) has disrupted an owner-builder’s plan to install a swimming pool on their property without obtaining a building permit.

The site cut was sheer, with no batter – or receding slope – appropriate for the soil type. It was also unsecured, with no safety barriers surrounding the illegal excavation.

Council records revealed no building permit authorising the swimming pool had been issued, despite excavation works having commenced.

Following advice from the VBA, the City of Wodonga’s Municipal Building Surveyor issued an Emergency Order requiring the owner-builder to immediately secure the site and install a safety barrier to prevent anyone falling into the excavation.

The units – all adjoining and part of a larger complex – were found to have inadequate and non-compliant fire-separating walls. In the event of a fire, flames could spread far more easily to the adjacent units, further endangering property and life.

The builder responsible for the site was issued with a letter notifying them of the defects discovered and the time frame in which they must be rectified.

The builder has since committed to fixing all non-compliant fire-separating walls at the site.

The matter will be closed once the builder supplies evidence to the VBA that the required rectification work has taken place.