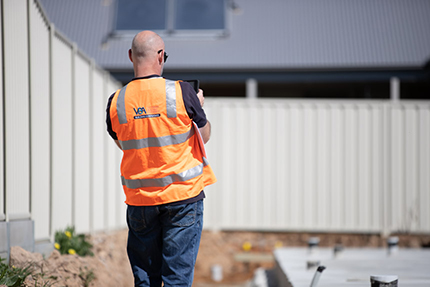 The Victorian Building Authority (VBA) is warning Geelong’s builders and plumbers to make sure their work is compliant or risk further action.

Across Greater Geelong, inspectors found serious cases of non-compliant building work on one third of the 763 sites visited in the region by the VBA’s Proactive Inspections Program in the last financial year.

The VBA’s Director of Inspections and Complaints, David Brockman, said the Authority deployed inspectors to scores of active building sites across Victoria every day to maintain standards and protect consumers.

“When we find potential faults, we notify the building practitioner or plumber and require them to fix the issue before the build progresses and owners are left with defective work, additional costs and stress.”

Issues identified by the VBA in the region included problems with timber framing, defects in roof drainage systems and non-compliant gas installation, which risks exposing people to carbon monoxide poisoning.

Other issues include an unprotected excavation with a depth of more than 1.5 metres, a boundary undercut by more than 50 centimetres, insufficient waterproofing in wet areas, unreinforced masonry, and pedestrians forced to walk on a road to bypass a rubbish skip blocking a footpath outside a building site.

Serious cases of non-compliance risk the safety and amenity of occupants and have the potential to put the public at serious risk if unresolved.

They can also leave owners with large and unwanted debt, as repair costs for serious defects can be substantial if not fixed during construction.

“The VBA monitors non-compliant sites for rectification work and only closes the matter when evidence of compliance is provided and verified,” Mr Brockman said.

“We want building practitioners and plumbers to learn from their mistakes and avoid making them again, so owners don’t face financial costs and added stress caused by faulty work.”

The most serious non-compliances are referred to the VBA’s Investigations team for further action.

Owners can make a complaint about non-compliant building and plumbing work on the VBA website.